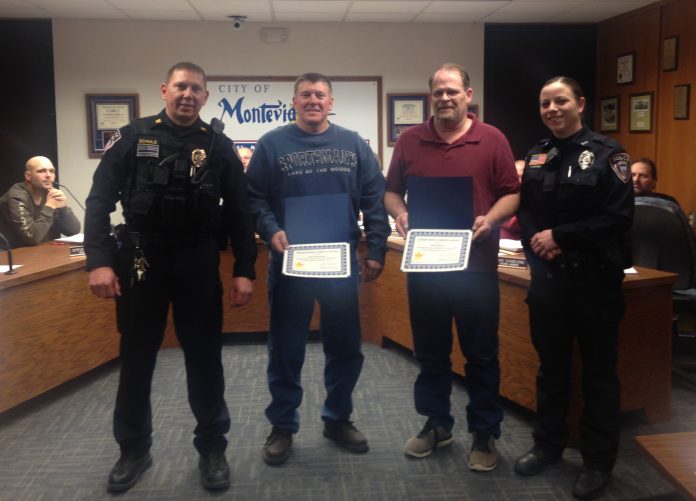 At the Montevideo City Council meeting on Monday night, Interim Police Chief Ken Schule presented Citizen Public Service Awards to Jason Sachariason and Daniel Sanborn, both of Montevideo. Sachariason and Sanborn aided in the arrest of a burglary suspect at a local business earlier this month.

On January 8, on-duty Officer Carmen Beninga recognized a male individual at a local business whom she believed had an active warrant out for his arrest. After confirming the warrant with dispatch, Beninga confronted the man, who refused to cooperate and attempted to leave the business. Beninga ordered the man to put his hands behind his back, which he refused to do.

At this point, a bystander – later identified as Jason Sachariason – offered assistance by restraining the suspect’s right arm behind his back while Beninga put a handcuff on. Another bystander, Daniel Sanborn, then offered assistance by restraining the suspect’s left arm. The suspect was properly cuffed and taken to jail. Beninga and Sachariason suffered scrapes to their hands during the incident.

Interim Police Chief Ken Schule stated on Monday: “The selfless actions by Sachariason and Sanborn aided in the arrest of an uncooperative suspect and possibly saved Beninga and others from more serious injuries.”

At the time of his arrest, the man was carrying stolen property, as well as marijuana and methamphetamine drug paraphernalia. He is suspected to have been involved in the recent chain of holiday burglaries in the Montevideo area.