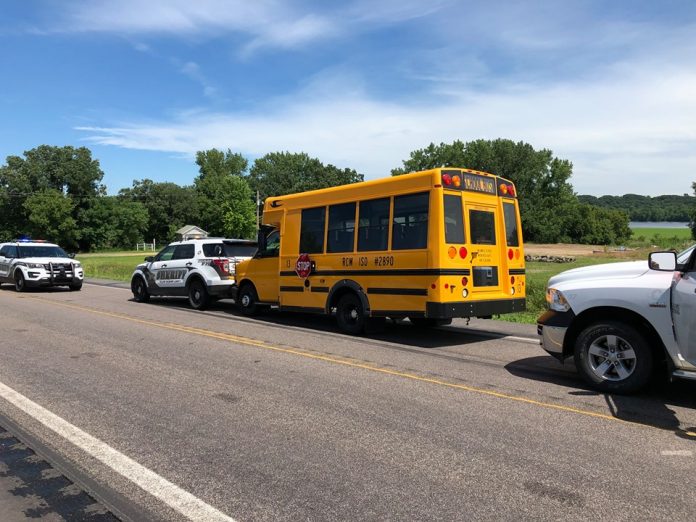 DeBlieck video.Press ReleaseGranite Falls, MN- This press release will serve as an update to the incident on 7/17/19 regarding the school bus accident and related stop of the school bus.On 7/17/19 the YMC Sheriff’s office received several 911 calls about a school bus that had crashed into vehicles in Granite Falls and was traveling on Highway 212 west on the wrong side of the road. Deputies were able to catch up to the bus about 2 miles west of Granite Falls. The vehicle was traveling in the wrong lane at about 40 miles per hour. Deputy Sheriff Eric Diekmann was able to pass the bus and provide emergency lighting in front of the bus. Chief Deputy Wayne DeBlieck followed the bus and provided information to the 911 dispatcher and other responding vehicles. The bus appeared to the deputies to not have any passengers in it and the driver appeared to the deputies to be suffering from some sort of medical situation. The quick actions of Deputy Diekmann by providing lighting and siren to oncoming traffic no doubt saved motorists traveling towards the bus and the driver from possible injury or death. Deputy Diekmann was able to get close enough with the rear of his squad car to bump the bus and using his brakes slow it down. Once the vehicle was almost stopped, Greg Meyer (a Granite Falls Fireman) got out of his personal vehicle and opened the door to the bus and was able to stop the bus and put it in park. Greg Meyer had witnessed the accident in Granite Falls and was also in front of the bus with his flashers on attempting to warn on coming motorists. His selfless actions made this very dangerous situation come to an end with nobody getting injured. The school bus is owned by Renville County West School and was operated by Brian Fuller (70) from Renville, MN. He was transported to the Granite Falls Hospital by the Granite Falls Ambulance. His condition is unknown. Dash cam video of the incident is available on the Yellow Medicine County Sheriff’s Facebook page.

A school bus driver lost control of his vehicle due to a medical emergency on Wednesday afternoon in Granite Falls. The bus was stopped only after a daring rescue operation by Yellow Medicine County Deputies and a Granite Falls fireman.

At approximately 12:04pm on Wednesday, the Yellow Medicine County Sheriff’s Office received multiple 911 calls stating that a Renville County West School District bus was driving on the wrong side of the road. Callers said the bus had hit several cars on Highway 212 near the stop lights in Granite Falls and continued traveling westbound without stopping.

Deputies located the bus about 2 miles west of Granite Falls, traveling in the wrong lane at about 40 miles per hour. The pursuing officers figured that the driver may be experiencing a medical emergency.

Yellow Medicine County Deputy Sheriff Erik Diekmann pulled around the bus and performed a rolling road block, slowing the bus down enough for Granite Falls fireman Greg Meyer to jump out of his vehicle, reach in, and place the bus in park.

The driver of the bus, 70-year-old Brian Fuller of Renville, was found to be experiencing a medical emergency. He was transported to the Granite Falls Hospital. His condition is unknown.

The bus damaged a total of three vehicles, yet no injuries were reported. No children were on the bus at the time of the incident.