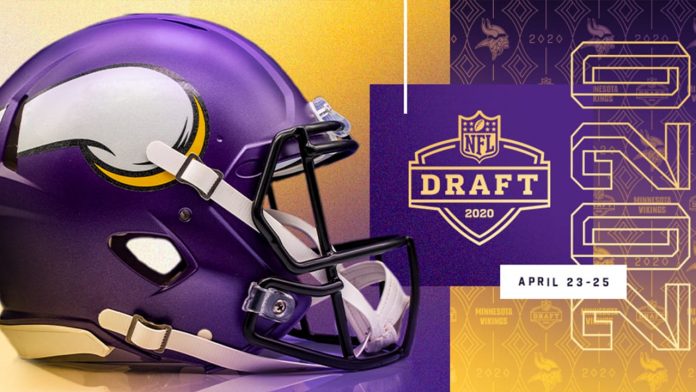 (Fox Sports North) — The Minnesota Vikings took care of both sides of the ball in the first round of the 2020 NFL draft, selecting wide receiver Justin Jefferson and cornerback Jeff Gladney.

The draft is hardly over, of course. Minnesota has three picks on Day 2 – one in the second round and two in the third – and with more holes to fill.

There will be plenty of good players to choose from in positions of need for Minnesota. The Vikings currently have the 26th pick in the second round and 25th and 41st in the third, but also have the potential to move up by dealing later picks (Minnesota has two selections in the fourth, fifth and sixth round and two in the seventh).

Here are a number of players who are available and expected to be drafted in rounds 2-3 which might be a fit for the Vikings (listed in alphabetical order):

Ben Bartch, OT, St. John’s (Minn.): Bartch started the last two years for the Division III Johnnies after playing tight end. He was named a second-team All-American as a senior. He looks the part but obviously would be making a big jump in level of play.

Ross Blacklock, DL, TCU: If Minnesota wants a versatile defensive lineman, this might be the guy. Blacklock can play any spot along the line. His stats weren’t eye-popping – 40 tackles, nine tackles for loss, 3.5 sacks in 2019 – but scouts love him.

Ezra Cleveland, OT, Boise State: Cleveland had gained some steam lately as being a possible first-round pick. He was a four-year starter for Boise State missing just one game. Big (6-foot-6), strong and quick. He might not be ready as a Day 1 starter, but he could probably hold his own.

Grant Delpit, S, LSU: His stock is falling due to a bevy of missed tackles, yet he’s a willing tackler, so perhaps he just needs some coaching up. Delpit was named the nation’s top defensive back in 2019 as well as a consensus All-American. If the Vikings decide to move on from Anthony Harris, Delpit could be ready to go on Day 1.

Kyle Dugger, S, Lenoir-Rhyne: Dugger missed half the season and was still named the Division II Defensive Player of the Year. Obviously, there’s some concern going from D-II to the NFL, but Dugger won’t make it out of the second day and is another possible replacement for Harris.

Jacob Eason, QB, Washington: If Minnesota wants to look to the future, Eason could be the man. He’s got a strong arm and probably needs a year or two to learn the game and improve – a good situation with the Vikings. It’s hard seeing Eason make it to Day 3.

Jordan Elliott, DL, Missouri: Only started one year but led the Tigers with 10 tackles for loss. As a reserve in 2018, had eight TFL. Strong d-lineman could provide some bulk on early downs and also contribute as a pass rusher.

Jonathan Greenard, Edge, Florida: You often hear the terms “upside” and “high motor” being used during the draft. Those could be applied Greenard, who had 9.5 sacks, three forced fumbles and five passes defensed in his lone year at Florida (he transferred from Louisville after missing all of 2018).

Yetur Gross-Matos, Edge, Penn State: One of many players who was mocked to Minnesota in the first round and is still on the board. A two-year starter, Gross-Matos had 17.5 sacks combined the past two seasons and played in a 4-3 defense.

Robert Hunt, OG, Louisiana: A four-year starter – the first two years at left guard, the last two at right tackle – Hunt played for a team in a run-heavy offense, which could appeal to Mike Zimmer’s offensive style. He did have surgery this past January and has some off-the-field issues. But it’s not a great draft class at guard and Hunt might be the best of the bunch.

Jalen Hurts, QB, Oklahoma: An intriguing prospect who emerged in his one year at Oklahoma after three uneven years at Alabama. Hurts can hurt you with his arm (3,851 yards, 32 TDs) and legs (1,298 yards, 20 TDs).

Jaylon Johnson, CB, Utah: Could the Vikings make it two cornerbacks in the first two days? In the passing-heavy NFL, you can never have too many. Johnson was the most mocked player to the Vikings in the first round. Johnson was a second-team All-American after recording 13 passes defensed and two interceptions in 2019.

Josh Jones, OT, Houston: Was mocked by many in the first round to Minnesota. It seems doubtful he’ll be around deep in the second round, but he’s someone who could come in and be a Day 1 starter, if needed.

John Simpson, G, Clemson: A consensus All-American in 2019 and a two-year starter at a powerhouse program. Has some of the intangibles, such as leadership (voted team captain), which teams like. He would need to adjust to a totally different kind of offense, never mind going from college to pro.

Prince Tega Wanogho, OT, Auburn: Starting left tackle for the past three seasons at Auburn despite not playing offensive line until 2016 and not even playing football until 2014. The inexperience means he’ll need some time. So, it depends on how you feel about another year or two with Riley Reiff.

Antoine Winfield Jr., S, Minnesota: Surely this would be a big hit with some of the fan base. Winfield is shorter than you’d like, but he can probably play either safety or corner in the NFL. And he’s a playmaker, picking off seven passes, forcing two fumbles and recording three sacks in 2019.