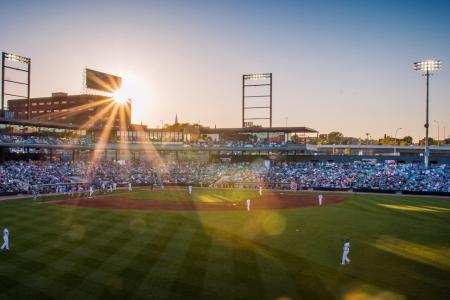 (St. Paul, MN) — According to a press release, the St. Paul Saints will begin their 2020 season on July 3rd with Sioux Falls Stadium as their “home field”.

The American Association of Independent Professional Baseball announced on Friday that they will play a 60-game schedule and implement a hub city system until COVID-19 restrictions are lifted across the league. Sioux Falls, Fargo, and Milwaukee will serve as hub cities for the league.

“Our sincere hope, and frankly, our plan is to play baseball in St. Paul sooner rather than later,” Saints Executive Vice President/General Manager Derek Sharrer said in a press release.

“There were several contingencies discussed, but we realized moving forward with this system was both best for the league and for our ability to accomplish our primary goal of entertaining fans at CHS Field this summer.”

Under the system, the league will use six teams at three different hubs. The Saints will be paired up with the Sioux Falls Canaries. The Winnipeg Goldeyes are with the Fargo-Moorhead RedHawks at Newman Outdoor Field in Fargo. The Chicago Dogs will be paired with the Milwaukee Milkmen at Ballpark Commons.

Until then, the Saints have been developing a COVID readiness plan to prepare for their return including socially distant seating, cashless payments and increased sanitation measures.